It is a big week for former sports promoter Barry Hearn. His anticipated autobiography, Barry Hearn: My Life, goes on sale on Thursday. Furthermore, the World Snooker Tour, an organization that the 73-year-old presides over as its president, stages its showpiece World Championship final this weekend. 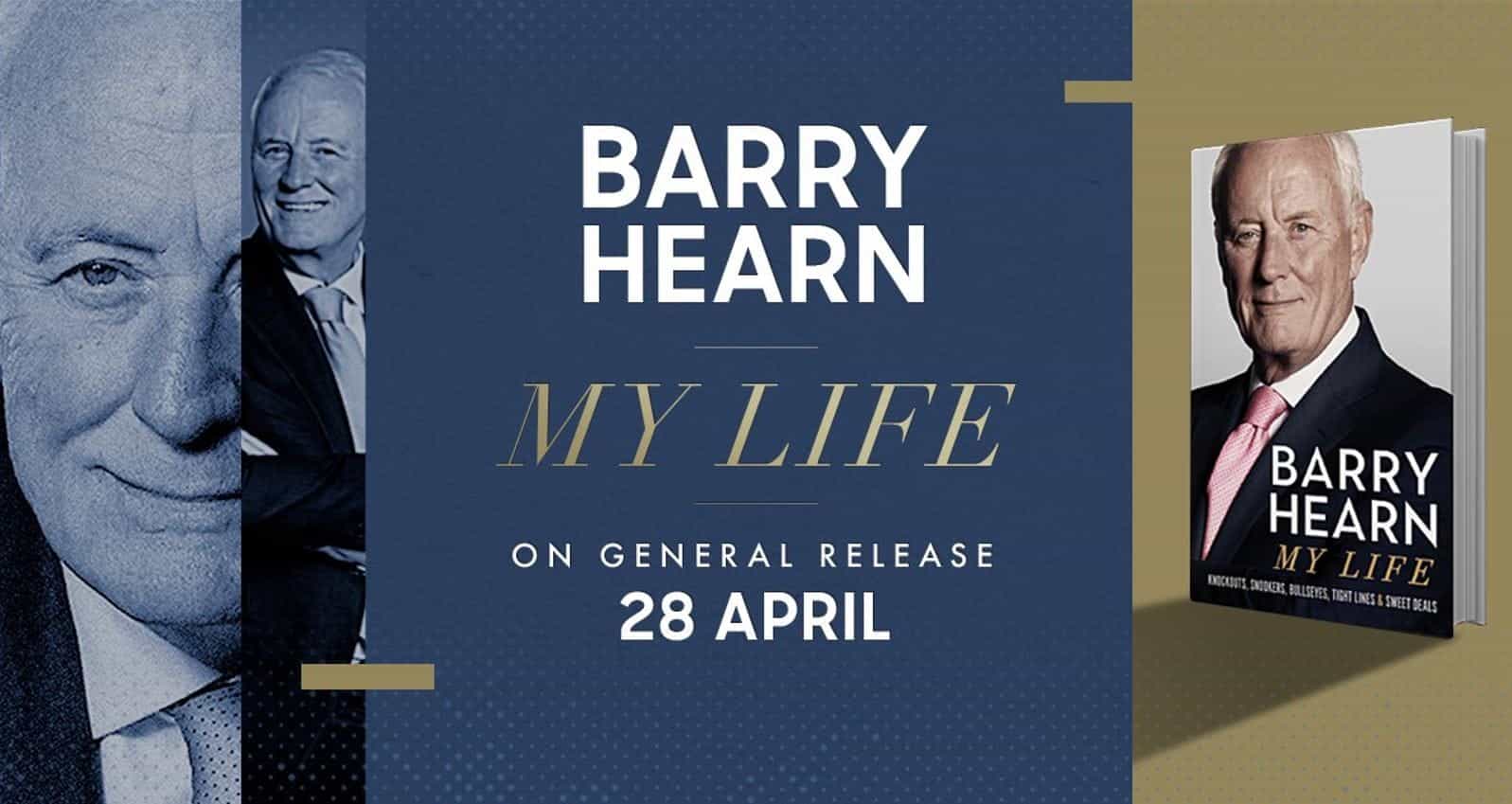 Snooker is where Hearn came to prominence during the 1980s. The sport enjoyed massive popularity during the decade and reached a crescendo in 1985 when the World Championship final between Steve Davis – who Hearn managed – and Dennis Taylor attracted 18.5 million television viewers.

The final frame of this epic confrontation went down to the final ball. It took an hour to be played and finished at 12.23 am. Resultantly, the viewership was the highest ever recorded for any broadcast after midnight in the United Kingdom. The game remains the most-viewed program in BBC 2s history.

The World Snooker Championship began life in 1927. In its early years, most renditions were played on a challenge basis. Since 1969 the competition has utilized a pure knockout format. It has taken place annually since 1977 in Sheffield’s Crucible Theatre.

For many, the venue is snooker’s mecca. But, with a capacity of just 980 and a partition used to separate two matches played concurrently during the early stages of the competition proving unpopular, there have been increasing calls for a change of venue.

The Crucible is contracted to host the World Snooker Championship – sponsored by Betfred every year since 2015 – until 2027. However, there has been plenty of conjecture and suggestions as to how and where the event should proceed thereafter.

Neil Robertson, World Champion in 2010, has proposed using another venue in Sheffield in parallel with the Crucible during the early rounds.

“My idea is to make it kind of like Wimbledon, where you have Centre Court and Court One, so you give everyone who qualifies the one-table experience,” said the Australian earlier in the week. 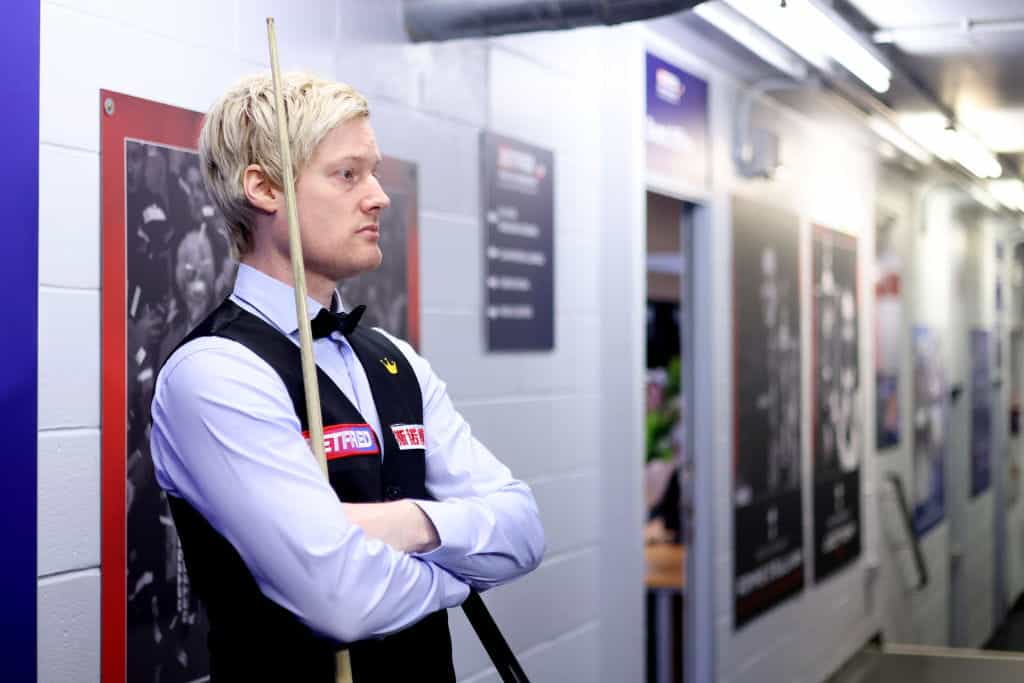 Neil Robertson, stood in a Crucible corridor, would like the World Snooker Championship to be played ‘Wimbledon style’ at two venues. ©GettyImages

“I think if you had two Crucible venues that are equal, it would be an amazing experience for everyone to end their season. Sheffield is well equipped to deal with that. Being the World Championship, it should be the biggest event from the start, not from the semi-finals.”

2019 World Champion, Judd Trump, has indicated he would be happy for the event to be moved altogether. Talking to BBC Sport he said: “I would rather play in front of more people. The more people, the better the atmosphere.”

“The Masters nowadays has overtaken this one by far,” he declared. “The more people you can get in makes you feel more alive. I just feel it could do with trying to play elsewhere one year.”

It is Barry Hearn’s task to appease the players while continuing to help the resurgent sport to prosper. He clearly hopes to remain in the South Yorkshire city. “My heart tells me that Sheffield and snooker deserve each other. It is a wonderful marriage,” he told the BBC last week.

“I think we are synonymous with Sheffield and the history we have created with the Crucible is, without doubt, a very important part of the brand of snooker,” the veteran promoter declared.

“Early talks at the moment with Sheffield council are why don’t we look at perhaps building a new Crucible in Sheffield, so we do not have to think about going anywhere else? If I could do anything on the existing site, of course, I would. But there simply isn’t space.”

Interestingly, on Monday, a report in the Sheffield Star newspaper suggested decades-old plans for a purpose-built ‘Billiardrome’ arena are back on the table.

Originally drawn up by architect James Burland, the man responsible for the design of the City of Manchester Stadium – better known as the Etihad Stadium – his vision is for a 3,000-seater circular venue complete with a rooftop TV studio, hospitality areas and a practice space beneath the main auditorium. 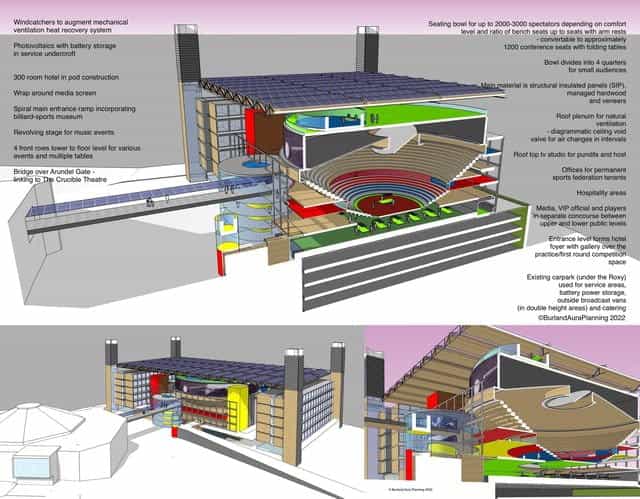 Speaking to Online-Casinos.com Burland, who confirmed he will be at the World Championship finals on Monday as a guest of the organizers, said: “The key to design it is to capture the spirit and atmosphere of the Crucible. It is really powerful and that is what my approach to architecture is all about.”

“We have done a host of research and there is a real appetite for a venue specifically designed for sports involving close-quarters action. The ambition is to add flavor to the backdrop that will drive fans to the venue, particularly the World Snooker Championship.”

Burland indicated there are several potential sites for his ‘Billiardrome’ and concluded that a potentially new venue for the World Snooker Championship is an “exciting project that would be brilliant for the City of Sheffield.”

The Conclusion of the 2022 Championship

This year’s World Championships semi-finals take place over three days – Thursday, Friday and Saturday – they are a ‘best of 33’ frame format. Six-time World Champion Ronnie O’Sullivan was the first player to book his place in this final four stage. He has been joined by Judd Trump, Mark Williams and John Higgins. The ‘best of 35’ frame final will get underway on Sunday. It concludes on Monday night.

The winner will receive £500,000 and the runner-up will collect £200,000. Neil Robertson currently has one hand on a £40,000 cheque for registering a 147-maximum break during his second-round loss to Jack Lisowski.

There have been 12 maximum breaks recorded in the World Championship – Cliff Thorburn produced the first in 1983 – but there have never been two registered in the same year. It is therefore unlikely Robertson will have to share his bonus prize.

The likelihood of a 147 break during the televised stages of the 2022 Betfred World Championship was rated 7/2 by the best sports betting sites at the outset of the competition. 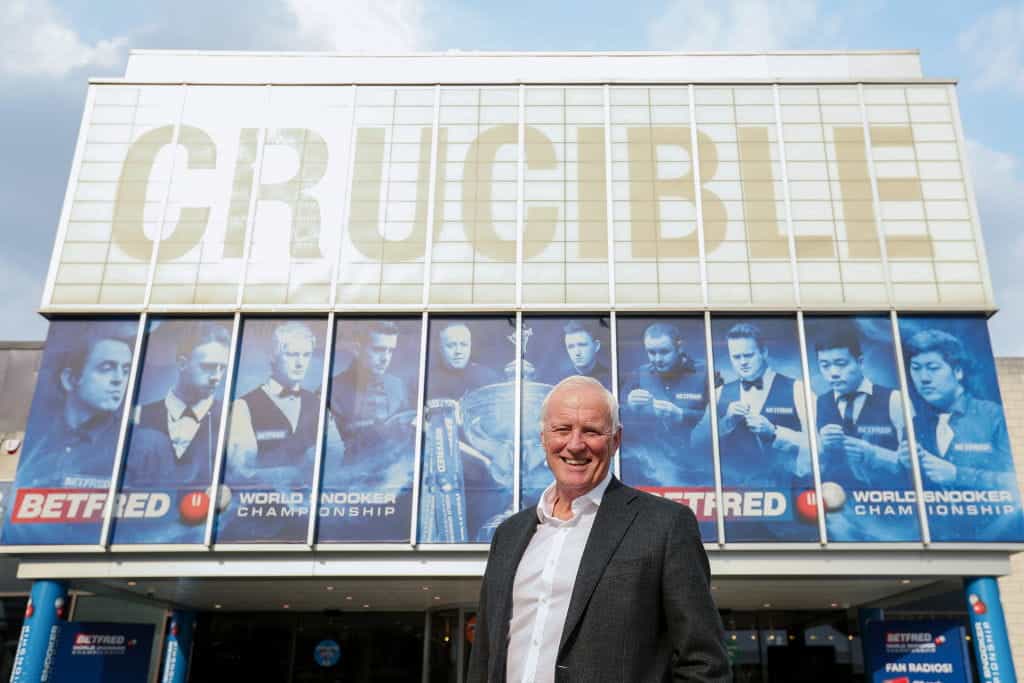